PARIS, FRANCE - APRIL 25: The association of merchants of the flea market printed T-shirts with slogans opposed to Grosvenor in 2007 and 2011, in Saint-Ouen flea market, on April 25, 2014, outside Paris, France. The one above reads 'Mr the duke is served!' with a caricature of Grosvenor. The one under reads 'Grosvenor you're wrong! I only accept one lease' (meaning the old lease and not the more-expensive new lease that Grovesnor tried to impose on them). Gerald Cavendish Grosvenor, the sixth Duke of Westminster and Britain's eighth richest man, has just bailed out of a nine-year battle against French dealers from two of the most prestigious antiques sections of the 130-year-old Paris flea market, or 'Marché aux puces de Saint Ouen' – the world's largest, with five million visitors a year. In 2005, the Duke paid €50 million (£41 million) for its high-end Serpette and Paul-Bert sections; last week he sold the lot at a reported €20 million loss to French landowner Jean-Cyrille Boutmy. (Photo by Lucas Schifres/Getty Images) 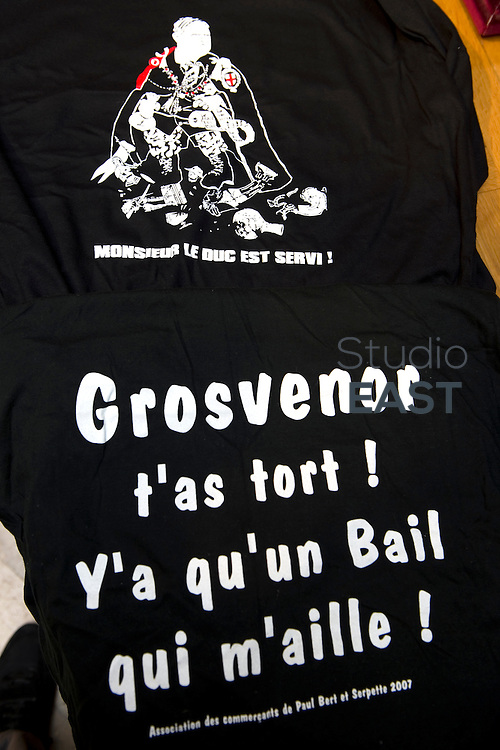